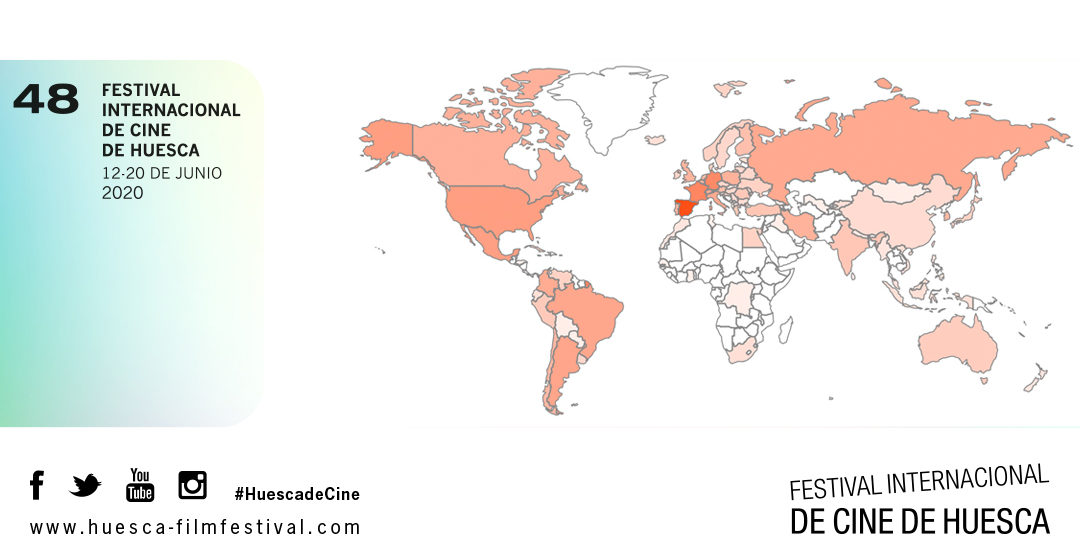 SPAIN, FRANCE, GERMANY, UNITED STATES AND MEXICO ARE THE COUNTRIES WITH GREATER REPRESENTATION IN A PROCESS THAT HAS RECEIVED WORK FROM THE FIVE COUNTINENTS

A THIRD PART OF THE WORKS PRESENTED ARE DEBUT FILMS, A DATA THAT CONFIRMS THE VOCATION OF THE CERTAMEN AS A CATALYST OF NEW TALENTS

The 48th International Huesca Festival has closed its pre-selection process with a total of 1,930 short films received from 93 different countries; This last figure sets a new historical record, exceeding last editions´with 90 participating countries. The organization of the Aragonese event -which will be held from June 12 to 20- has already started viewing the 30,000 minutes received (more than 20 days) to identify the works that will take part in the official section, split into three categories International, Iberoamerican and Documentary. The selected productions will compete to win the Dancing Prize, an award that has the endorsement of the Academy of Hollywood for the Oscars and the Academy of Motion Picture Arts and Sciences of Spain for the Goya Awards.

The analysis of the works received show a balanced distribution between the three competitions: 733 short films in the Iberoamerican competition, 844 in the International and 353 in the Documentary. The number of debut films presented (514), as well as the work of schools and universities around the world (427), stand out; These numbers strengthen the image of the festival as a meeting point for new filmmakers and talent catalyst. “This demonstrates, once again, that the festival is a clear indicator of what’s happening worldwide in the film world” says Rubén Moreno, director of the Huesca International Film Festival.

The organization has received productions of the five continents, being Spain the country with greater representation with 621 works, followed by France (158) and Germany (138); then, like most years, the four American countries that have exceed fifty tapes are United States (71), Mexico (67), Argentina (55) and Brazil (52). The rest of the continents are mainly represented by Iran (33) and South Korea (25) in Asia; Egypt (9) in Africa, and Australia (9) in Oceania. Together with all these, it is worth noting the presence of other less common territories in the great cinematographic circuits, such as Senegal, Kyrgyzstan, Paraguay, Georgia or Nepal; In addition to the entry, for the first time, of countries such as Congo or Myanmar.

The works, covering all types of formats and styles; animation, experimental proposals or works playing with a mix of fiction and documentary, are being valued to access one of the oldest competitions in Spain. It should be remembered that in addition to the cash prizes and the “passport” to some of the most prestigious awards in the industry, the Aragonese event has a solid network of projections internationally through the Institute Cervantes; In fact, in recent years, special sessions have been held in Moscow, Sydney, Vienna and Dublin. Together with this network, the Festival also works for and through the surrounding areas of the capital of the province of Huesca and thanks to the Provincial Council, other surrounding towns can enjoy this quality cultural offer.