WORLDWIDE PREMIERE OF DOGTANIAN AND THE THREE MUSKEHOUNDS, AT THE 49th HUESCA INTERNATIONAL FILM FESTIVAL 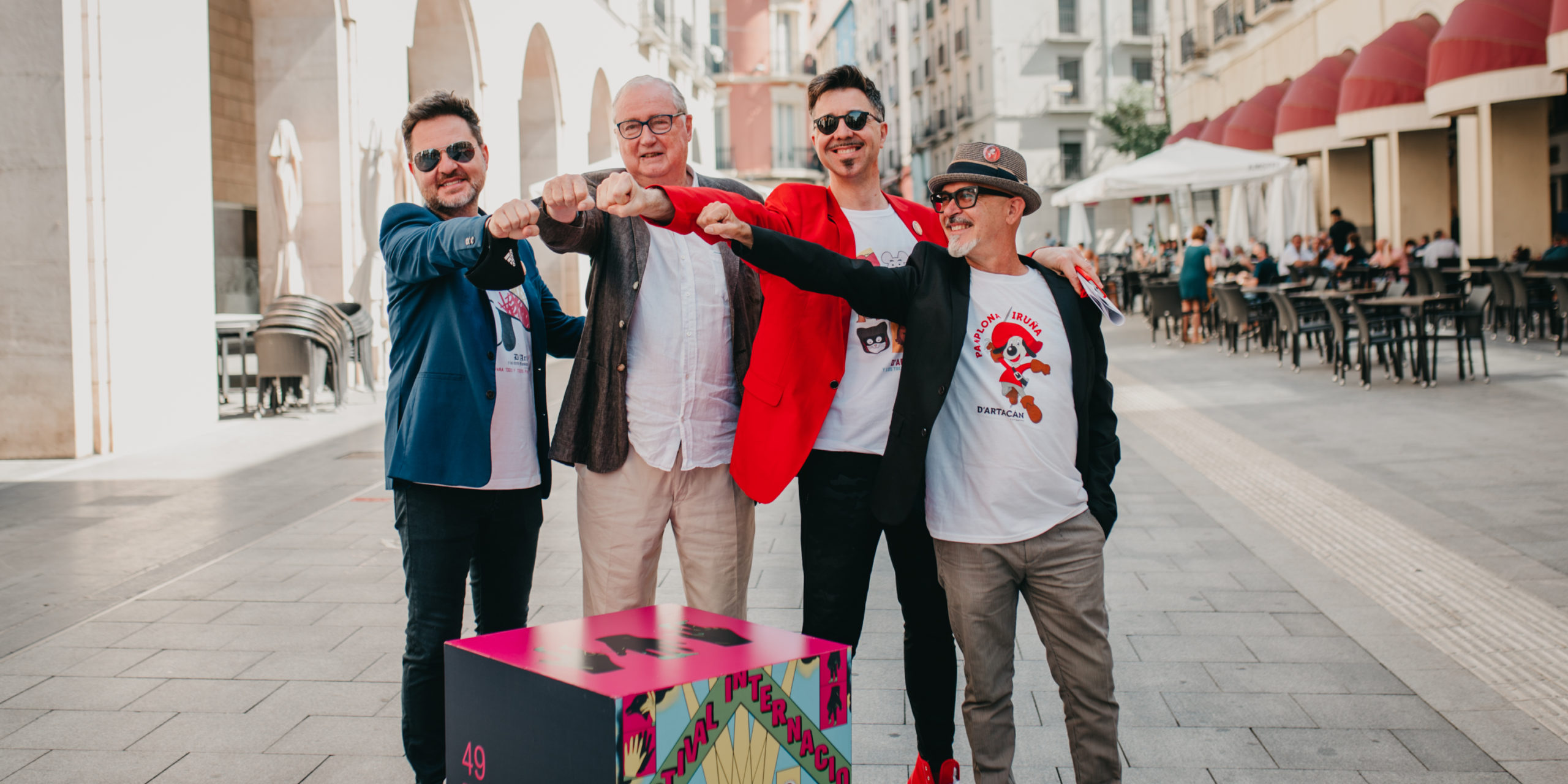 TONI GARCÍA, DIRECTOR OF THE FILM, AND CLAUDIO BIERN, CREATOR OF THE ORIGINAL SERIES, ALONG WITH THE REST OF THE ARTISTIC TEAM, PRESENT THE PREMIERE OF THIS EXPECTED ANIMATION FEATURE FILM BASED ON THE CLASICAL SERIES

On June 25, more than 400 screens in the United Kingdom and Ireland will premiere Dogtanian and the Three Muskehounds, the film by Toni García based on the series created by Claudio Biern. But the Huesca International Film Festival that has “the honor to show it for the first time”, in the words of the creator of the homonymous series, Claudio Biern. And the reason for giving this privilege to the festival is, according to García, who visited the contest in 2019 as a jury and showed the first images of the project, because “the Huesca International Film Festival has supported us from the start and for filmmakers it is important to favor a festival which has  endorsed your project from the beginning”.

Both, together with Paco Sáez, the film’s storyboard director, and Manel Gil-Inglada, composer of the soundtrack, are the capital of Upper Aragon to present the film at a press conference.

The film offers an new version of the classical television series (seen on more than 300 TV networks in more than 100 countries) inspired in turn by the most famous novel by Alexander Dumas. The impulsive and idealistic young man Dogtanian is the protagonist, a dog who leaves behind his native town in Gascony to go to Paris with a single goal: to become like his father, a muskedog of the King of France. In the capital he meets his muskedog comrades: Amis, Pontos and Dogos; and together with his horse Rofty and his squire Pom (a quarrelsome mouse and hustler), they will fight against the Machiavellian Cardinal Richelieu and his accomplices. All this,to the cry of “All for one and one for all”, “one of the best slogans in the world”, according to Biern, a passionate admirer of Dumas’s work.

Dogtanian and the Three Muskehounds targets a children audience. “The 26-episode series are no longer profitable,” said Biern. “The children have changed and so have the parents. Today the kids watch 40 screens at the same time although they often feel out of place in many of them ”. So Biern decided to go for a movie format.

Among all the catalog of series of BRB Internacional, the original Biern production company dedicated to television (including works such as Around the World in 80 Days and The World of David the Gnome), they chose Dogtanian and the Three Muskehounds because it was a well-known brand internationally with great impact. “You have to compete in the market against very powerful producers in inferior conditions, so we chose this title because we thought it had a great potential”, highlighted Biern. “It was a clear option to succeed” added Garcia.

Both mentioned that the amount of audiovisual adaptations that the story of Alexander Dumas has had over time worked in their favor. Not only did they confess to being inspired by Gene Kelly and Lana Turner’s version for this feature film, but they revealed that the BBC series on the Musketeers in 2014 contained plots and script twists that did not exist in the original novel, but which are present in the Biern series.

“In our film we have respected Dumas and the DNA of the series, creating a family product with the best possible animation. But an updated pace has also been added, the female characters have more prominence and are more empowered, and the supporting characters have a more active part. As the film progresses and accelerates, everything becomes more ambitious, ”explained García.

With a budget of eight million euros for production, and more than 450 professionals involved in it, Dogtanian is also a business project. “We chose this series to build on solid ground, because we want to promote Spanish animation”. Both defended the great potential that exists in our country and the amount of jobs that the sector generates. “For every euro invested in animation, five euros are generated for the Spanish economy,” revealed García. “There is talent,” said Biern, “the problem is that we have not created an industry, there is a lack of financial muscle to do so. And that is what we are trying to do”.

In the minds of all viewers, as in that of its creators, the soundtrack is an important part of the narration of this story. Gil-Inglada, the composer, stressed that the music sought to enhance the emotions, give narrative continuity to the story and reinforce the soul of the characters. Of course, the Three Muskehounds theme that the entire audience will recognize is featured as a leitmotif throughout the entire footage. On the sidelines, specific themes were also developed for each of the characters, and a new song was written, performed by Cristina Ramos and Serafín Zubiri.

For Dogtanian to come to life, music had to be alive. “And that is the work of the musicians” exclaimed Biern. Gil-Inglada then planned the recording of the soundtrack, involving the Navarra Symphony Orchestra together with the Orfeón Pamplonés and the Escolanía del Orfeón Pamplonés.

The screening, which has the active support of CADIS Huesca (Coordinator of Associations of People with Disabilities of the province of Huesca), will include an audio description for viewers who may require it.

The film is scheduled to premiere in France on August 11 and in Spanish theaters on September 3, in addition to having closed its distribution in such prominent markets as the United Kingdom or the United States.