‘The beam of light’ guiding the 45th edition 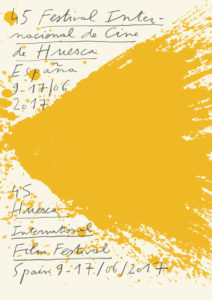 Huesca International Film Festival has also presented the official poster for its 45th edition, which has once more counted on Isidro Ferrer as an advisor. Produced by prestigious French artist and designer Paul Cox, the poster plays an important role in every edition of Huesca festival, but this time it is even more meaningful since it constitutes the backbone of the web design which has presented a new image: more accessible and intuitive, with a predominant yellow colour which will dominate this year’s communication campaign.

After the proposals seen in last editions, design twists and resumes a more artistic and abstract approach. ‘It is an impressive poster that offers many possibilities at a graphic and communicative level, it plays with a beam of light which is the essence of cinema, right as it refers to the clapperboard, our corporative logo’, said Azucena Garanto, who also remarked the importance of granting the author total artistic freedom so as to obtain high quality final results which have resulted in several international recognitions to the festival.

Paul Cox was born in Paris in 1959 and is an AGI (Alliance Graphique Internationale) member since 2003, a club that gathers the world elite of design and graphic arts, consisting of less than 500 members from our country, only names so outstanding as Isidro Ferrer or Javier Mariscal have joined it. Self-taught artist, Cox has produced many children book, posters, logos, but his link to the stage goes beyond since he has developed several projects of scenery or costume design for L’Histoire du soldat, at Nancy’s Opera House, or The Nutcracker, at Geneve’s Opera House. His style derives from all printing techniques but more in an experimental than in a reproductive way. Having an innate talent, great names as Japanese fashion designer Issey Miyake, have used some of his works in their collections and Pompidou Centre exhibited his installation Jeu de Construction in 2005. Besides, the author himself has started to publish regularly his work in a book; the first volume, entitled Coxcodex I, was published in 2004.