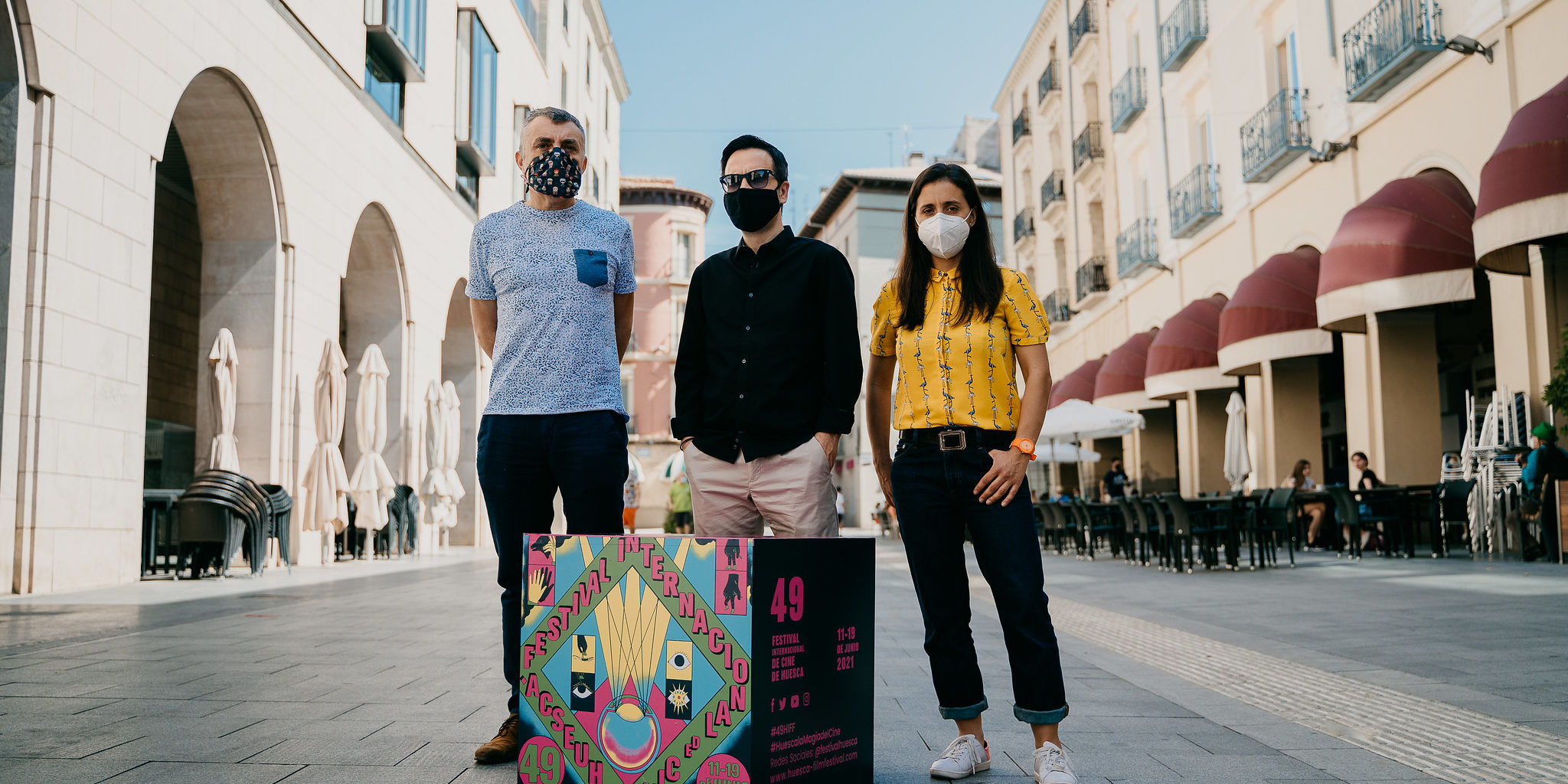 ITS DIRECTOR, GERMÁN RODA, VISITS THE CONTEST THAT HE OPENED LAST YEAR WITH MARCELINO, THE BEST CLOWN IN THE WORLD

VILAS AND ITS DOUBLES IS DEDICATED TO THE MEMORY OF JAIME FONTÁN, WO DIED RECENTLY

Last year, the Huesca International Film Festival opened with the screening of the documentary Marcelino, the Best Clown in the World, directed by Germán Roda and produced by Patricia Roda, although the film team couldn´t attend the event because it was still not possible to travel at that time.

A year later, the team has been able to come to the Huesca International Film Festival, together with the writer Manuel Vilas, for the world premiere of his new film: Vilas and his Doubles. “It is impossible not to recall what happened with Marcelino,” said Patricia Roda at the press conference, adding that COVID-19 interrupted both the distribution of that film, and the production of the following one. We were going to shoot Vilas and his Doubles in April 2020 and, obviously, all the plans fell through.” In the end, the 15 or 20 days of filming in Huesca, Zaragoza and Madrid, among other locations, had to be spread over several weeks.

Marcelino is also part of the genesis of this new documentary. “At the end of the filming of Marcelino, Pepe Viyuela and I were happy with the result but sad that it was over,” said Germán Roda. “We wanted to do something together again and, thinking of Aragonese writers who could be of interest for a documentary, Pepe told me that, on the recommendation of José Sacristán, he had read a book he loved. I then also read Ordesa and it moved me deeply. Without having lived what Manuel tells in the book, I felt as if it had happened to me. It isn’t just about the story, but how he tells it”.

However, the format of the documentary was unclear from the start. “I thought about it a lot. At first, it was going to be a time travel story in which Manuel Vilas was dead and a girl wanted to do a thesis about him. In the end we did what you will see tonight, which I think is what it had to be. I wanted it to be exciting, like the emotion I felt reading Ordesa. The documentary is not only about that book, but also about his life and his work. My biggest doubt was whether I could reach the literary level required, but that conflict also made me want to face this challenge ”.

Manuel Vilas remembers that when he met Germán and Patricia, he felt “joy and fear”. “At first, I was very surprised that someone wanted to make a documentary about me, but when we met for the first time we realized that we had a lot of complicity and friends in common”. The director also added that “we were all clear that we were not going to make the typical and topical biographical documentary. We wanted to do something more open, with a different angle, bring up more issues ”. “I have not seen the documentary yet,” confessed the writer, “but I can’t wait to see what he has done with me.”

Vilas confessed that he is a fan of the work of Germán and Patricia Roda since he saw the documentary about the Aragonese clown, after that first meeting in which they understood each other perfectly. “It thought it was one of the most powerful documentary on Spanish values, because it describes with tremendous depth what Spanish culture is. In other words, it says that for an artist born in Jaca to succeed internationally, one had to renounce his roots ”.

In Vilas and his Doubles, in addition to Vilas and Roda, José Sacristán and Pepe Viyuela relive the most important moments of their lives and talk about literature, movies, family, death, art and love, featuring Ordesa and Monte Perdido National Park as a constant background. Rubén Moreno, director of the Huesca event, recalled what José Sacristán told him when he came to the festival a before the pandemic: “I have become a close friend of Manuel Vilas. I like him a lot, I’m going to recommend him to everyone ”. “I have to admit that Sacristán is the voice of our country. What he says, with that voice, becomes law, “said Vilas laughing.

During the press conference, Patricia Roda also recalled Jaime Fontán, Aragón TV’s production manager, who died just over a week ago. “The film is dedicated to him, to a person who always did a lot for cinema and, especially, for cinema made in Aragon.”