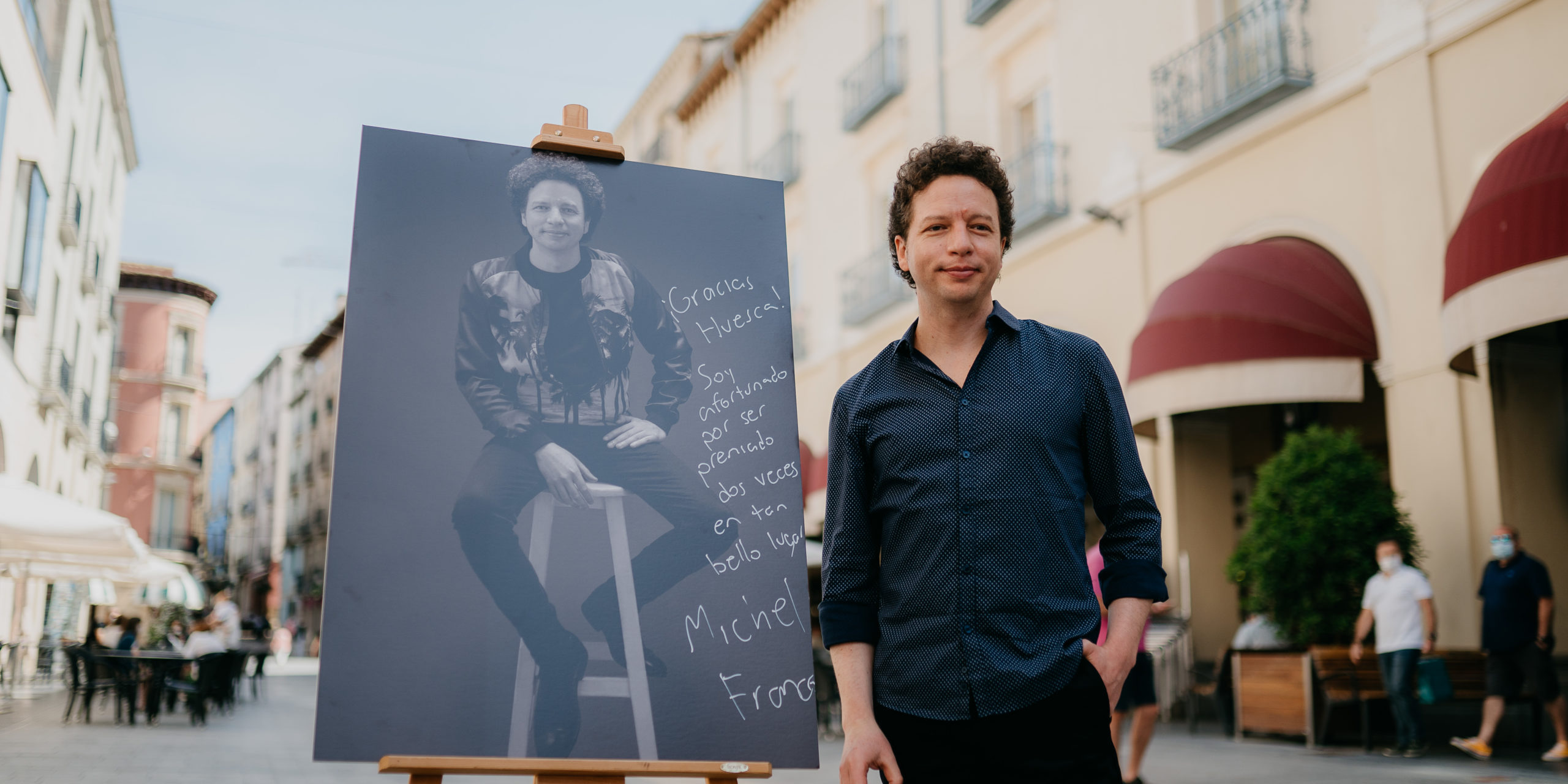 FRANCO WON THE GOLDEN DANZANTE AWARD FOR THE BEST SHORT FILM IN 2003 WITH ENTRE DOS, AN AWARD THAT WAS THE START OF HIS INTERNATIONAL CAREER

Michel Franco has returned to Huesca, the place where it all began. Grateful and excited at the press conference he attended as winner of the Carlos Saura City of Huesca Award at the 49th International Film Festival, the Mexican filmmaker recalled his first step in the contest, 18 years ago, when he competed (and won) with the short film Entre Dos.

“Thank you very much for inviting me after 18 years. It is like looping the loop and it is very emotional for me. Somehow, it all started in Huesca. I studied Communication, which I did not finish, and I made many shorts, but most of them did not work, because I believe cinema is learned through trial and error ”, he began to tell. “Entre Dos was a very small production, filmed in two days by eight or ten students. It was the first short that I dared to send to festivals because, although it was very ambitious, it seemed impossible for me to make a career in the world of cinema. In Mexico we know that Huesca is one of the most important short film festivals, and I never thought they would accept it, but surprinsingly, it was selected, they sent me a plane ticket and they paid for the hotel ”.

What was supposed to be the first stop on a trip around Spain, taking advantage of the visit to the contest, ended up as a short stay in the capital of Alto Aragón, because right after the final verdict, all he wanted was to run back to Mexico to celebrate,. “I couldn’t believe it when, one day at eight in the morning, after one of those incredible days -watching shorts during the day and partying at night- they called me to let me know that I had won the Golden Danzante. It was an amazing surprise. I told my father that they also gave me 6,000 euros, then my family realized that this was for serious. This award has helped me to assume that I could make a career in cinema ”.

Franco highlighted that the very experience of attending the Huesca Festival was already truly important for him. “The award was the culmination, but even if I hadn’t won, the experience of screening my short film outside my country, sharing this moment with an audience, being able to talk about it, would have been more than enough.”

The filmmaker also recalled two films that he saw at the age of fifteen -when the seed of cinema began to grow in his head-, which marked him deeply: The Young and the Damned, by Luis Buñuel, and Cría Cuervos, by Carlos Saura. “I saw Cría Cuervos again recently and it had the same effect on me as when I was a teenager. It is a masterpiece, although I cannot say if it is the best of Saura because he is the author of so many masterpieces. The fact that he is the person who will give me the award makes me feel very excited ”. Saura endorsed the award named after him in 2019 and since then he has been in charge of handing over the trophy personally to the winner. In addition, Franco said, “they have told me that we will have lunch together today. For me that is the best award ”.

During the press conference, he talked about his film career, made up of a large number of short films and six feature films which positioned him as one of the most import name and with the greatest projection of current Ibero-American cinema. His debut feature film Daniel & Ana (2009) was selected in the “Director’s Fortnight” at the Cannes Film Festival. He then returned to that festival with After Lucía and won the “Un Certain Regard” section.

Impressed by his work, Oscar-nominated actor Tim Roth starred in Chronic; for which Franco won the award for Best Screenplay in the official section of the Cannes Film Festival in 2015. His fourth visit to “La Croisette” was with Las hijas de Abril (2017), a feature film which also competed at the San Sebastián Festival and that granted his actresses with various recognitions. Emma Suarez was nominated for the Platinum Awards, while the Mexican Ana Valeria Becerril received the Ariel for Best Newcomer.

His most recent work, New Order, won the Grand Jury Prize at the last Venice Film Festival, as well as the José María Forqué Award for Best Latin American Film. The film that deeps into the social and political differences of his native country was acclaimed by both critics and audience; While specialized media described it as “one of the best films of the year”, it reached the first position at the box office during the week of its premiere in Spain.

“My cinema reaches the general public. And that makes me very happy because I don’t make films for festivals, but for the audience, and not just for the Mexican audience. ” When asked what image of his country he wants to project, he replied that the Mexico he portrays “is very varied. I know I am part of the privileged class but I want to show other worlds. For example, in A los Ojos, my least successful film, the story was taking place in the marginal areas of Mexico ”. He explained that the fact that he rejected an offer for its première was partly to blame for this lack of audience. Although he also believes that another reason for the little success was that  “people don’t want to see misery, Mexico doesn’t want to face his own reality. Buñuel was persecuted for making The Young and The Damned “.

The Mexican also defended the role of the film director: “He is the one who should have the first and last word in a movie.” He confessed that he produces his own works, because in his debut feature he realized that he had to be in control. “Producers often act as if it just takes strength and money, all in a big way to make a movie, but they often forget that they have to understand the specific needs each film requires. And that’s what I try to do that when I produce the films of others ”. He admitted that it is not easy to make a film. “They always judge you by how successful your last movie was. Now I can breathe thanks to New Order, but I know I’ll have to start from scratch again. So you always have to be ready to film without money ”. And he said that, although he does not like to talk about his next projects not to spoil the surprise, he indicated that he finished shooting just before the pandemic and he has been busy with post-production during this last year.

To close the press conference, he wanted to make clear his intention with the award. “I will dedicate the award to two people. First of all, to Pepe Escriche, of whom I have very good memories, he treated me very well, and second,  to Enrique Alagón, an Aragonese who at the age of twenty went to live in Mexico with nothing, started repairing shoes working very hard, met Arturo Ripstein and other cinema artists at his job, and ended up founding the most important movie processing lab in Mexico, LaboFilms. I dedicate it to him because, in my first short films, my father did not understand why I was always saying “This Alagón never wants to charge me for processing, not even if I pay it in installments.” When I won the award in Huesca, I told Enrique who explained to me the meaning of the award’s name. He was moved because he felt that: ‘The name of my business has been in Aragón’”.

Excited with the mixture of memories he has of his first time in Huesca, Franco admitted that it was somewhat uncomfortable for him to see his own work. But, “with the contradiction that this implies”, he will see Entre dos again, as the short film will be part of the tribute. Still, he will do so “with great emotion, almost twenty years later”.

Carlos Saura was the first person to collect the Ciudad de Huesca award in 1991; followed by others like Fernando Trueba, Arturo Ripstein and Julio Medem. In 2014, the award was reformulated and acquired a new value, seeking to highlight talent and projection; In this spirit, the tribute was given to the talent of Adriana Ugarte, Silvia Abascal, Paula Ortiz, Leticia Dolera, Aura Garrido, Isabel Peña, and Rodrigo Sorogoyen and Anna Castillo.