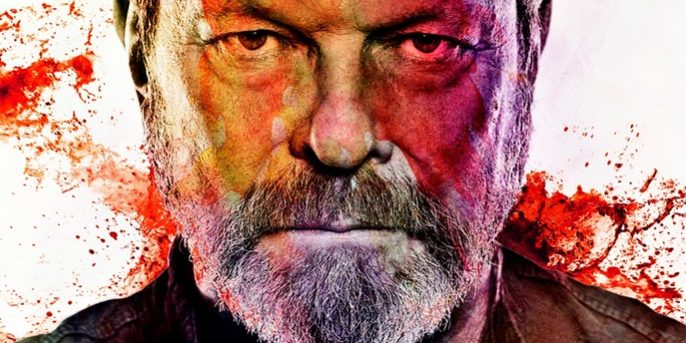 THE AWARD CELEBRATES ONE OF THE MOST OUTSTANDING CAREERS OF THE 7TH ART REWARDED AT CANNES, BERLIN, VENICE, THE GOLDEN GLOBE AND HOLLYWOOD’S OSCARS

THE ORIGINAL MEMBER OF THE MONTY PYTHON AND AUTHOR OF WORKS SUCH AS BRAZIL, 12 MONKEYS, FEAR AND LOATHING IN LAS VEGAS AND MONTY PYTHON AND THE HOLY GRAIL WILL BE IN HUESCA TO RECEIVE THE AWARD ON WEDNESDAY, JUNE 15

For its 50th edition, the Huesca International Film Festival will present the Luis Buñuel Award to the director, screenwriter, actor, and producer Terry Gilliam. The Oscar-nominated filmmaker will be in Huesca on Wednesday June 15 to receive this recognition to his whole career; A career which includes films that are part of part of the history of cinema such as Brazil, The Fisher King, 12 Monkeys, Fear and Loathing in Las Vegas, Monty Python and the Holy Grail and The Adventures of Baron Munchausen. A filmography that “has a cinematographic language with a unique personal hallmark and where the short film has always been present. There can be no better name for this award and more so in our ’50th edition'” according to Rubén Moreno, director of the Huesca event that celebrates its special anniversary from June 10 to 18.

The Olimpia Theater will host the ceremony to honour the British filmmaker born in the United States; the celebration will include the screening of his latest behind-the-scenes feature film: The Man Who Killed Don Quixote. Based on the masterpiece of Miguel de Cervantes, this project forged a legend around it after more than two decades of production and several shoots that were interrupted by all kinds of unexpected incidents; a story that even brought about its own documentary. The feature film would finally hit the big screen in 2018 with a world premiere at the Cannes Film Festival; starring Oscar nominees Jonathan Pryce and Adam Driver, the cast includes important names in Spanish cinema such as Jordi Mollá, Rossy de Palma, Óscar Jaenada and Sergi López. The film won two Goya Awards (Best Production Direction and Best Makeup and Hairdressing).

The name of Terry Gilliam thus is added to the impressive record of personalities who treasure the Luis Buñuel Award, celluloid stars such as Bertrand Tavernier, Marisa Paredes, Stephen Frears, Carlos Saura, Ángela Molina, Jean-Claude Carrière, Costa-Gavras, Álex of the Church, Gonzalo Suárez, the Taviani brothers and Isabel Coixet, among many others.

A CINEMA WITH A UNQUE IDENTITY

Terry Gilliam (Minnesota, 1939) is a filmmaker in the broadest meaning of the word: director, screenwriter, actor, producer, and animator. Born in the United States and naturalized British in the 1960s, Gilliam was one of the original members of Monty Python, a key comedy group in the Anglo-Saxon scene of the 1960s and 1970s. His passion for the seventh art came out of names like Georges Mélies, Walt Disney and Stanley Kubrick.

After proving his talent in the world of television, the short film would be his gateway to the seventh art, Story Time and Miracle of Flight would give way to his debut in the feature film with his Monty Python partner, Terry Jones. Monty Python and the Holy Grail (1975) became a classic and one of the best comedies of all time.

Gilliam would try his luck behind the cameras alone with Jabberwocky (1977) and Time Bandits (1981); During the same period, he worked as an actor and screenwriter in the outstanding comedy set in the times of Jesus Christ, Monty Python’s Life of Brian directed by Terry Jones. Jones and Gilliam would team up again as directors in 1983 to shoot The Meaning of Life, although the uncontested recognition of the industry would come with Brazil (1985), a satire that received two Oscar nominations, one of them for the filmmaker himself for Best Original Screenplay.

At the end of the 1980s, he directed what is known as his “trilogy of imagination” with The Adventures of Baron Munchausen; a film shot in Belchite (Aragón), applauded by specialized critics, and awarded with four Oscar nominations and three BAFTA awards.

The 90s would start with The Fisher King (1991), a film starring Jeff Bridges and Robin Williams -who received a Golden Globe and an Oscar nomination for his performance-. The film was presented at the Venice Film Festival and received the Silver Lion for Gilliam as best director. Four years later, he directed 12 Monkeys, another definite success selected in Berlin; a feature film starring huge Hollywood actors like Bruce Willis and Brad Pitt who, as a matter of fact, then received the definitive film industry endorsement with a Golden Globe and the nomination to an Oscar. At the end of the decade, he directed Fear and Loathing in Las Vegas, with Johnny Depp and Benicio del Toro, which became a cult title selected for the Palme d’Or at Cannes.

The new century started with the convoluted filming of The Man Who Killed Don Quixote, a revision of Cervantes’ most popular work which was finally cancelled although it brought about a documentary about its frustrated creation process.

The Brothers Grimm and Tideland marked his return behind the camera, before initiating another project fraught with challenges: The Imaginarium of Doctor Parnassus Heath Ledger’s last acting jo, as The Dark Night ‘s Joker left it unfinished after his death. Terry thought of cancelling the film but finally decided to conclude the footage with three other actors to complete the character (Jude Law, Johnny Depp and Colin Farrell).

The latest films by the award-winning filmmaker are The Wholly Family, Best Short Film at The European Film Awards in 2011; The Zero Theorem, presented in Venice, and The Man Who Killed Don Quixote, the project that was finally shot in Spain and was released at the Cannes Film Festival.