SOLARIUM, KUN BI AND YOU CAN´T AUTOMATE ME, WINNER OF THE DANZANTE AWARDS OF THE 50TH HUESCA INTERNATIONAL FILM FESTIVAL 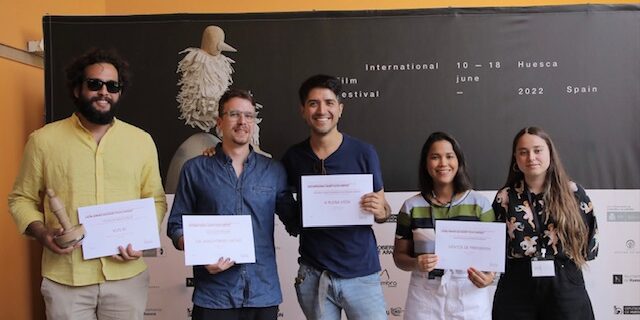 The French short film Solarium, by Jonathan Koulavsky; the Colombian Kun Bi, by Agamenón Quintero and Jorge Eliécer Alfaro; and You can’t automate me, from the Netherlands and Slovenia directed by Katarina Jazbec, have won the Danzante Awards in the international, Latin American and documentary competitions respectively at the 50th Huesca International Film Festival. Three works that thus go directly to the pre-selection of the Oscars thanks to their success in the Alto Aragonese contest, in an edition that closes with an “outstanding” balance as its director, Rubén Moreno, has underlined, “the short filmmakers have returned to the city, the public has supported all the proposals, we have had some exceptional tributes and the international impact is amazing”, he concludes.

THANKS TO THE DANZANTE AWARD, THE THREE SHORT FILMS ARE PRESELECTED FOR THE OSCARS

The Jury of the International Contest gave the Danzante Award to the short film by Jonathan Koulavsky for its ability to show the relationship between a boy and an animal, where responsibility wins over personal ambitions. The film, Solarium (France), tells the story of Johnny, a young jockey who begins to doubt his vocation. In the animation section, the winner was a co-production between Switzerland and France: Miracasas, the work of Raphaelle Stolz, wins the ‘Jinete Ibérico’ Award (given by the Instituto de Estudios Altoaragonese) for its approach to the subject of death.

Another of the award-winning works is that of the Austrian Mark Gerstorfer with Die unsichtbare grenze (Invisible Border) who received the Human Values Mention ‘Francisco García de Paso’. A heartbreaking portrait of how cruel are the rules that affects immigrants. In addition, the jury has awarded a special mention to Tierra (Mexico), by Gustavo Gamero, for the importance of a topic that should move the international community and the sensibility with which it is narrated.

COLOMBIA AND SPAIN STAND OUT IN THE IBERO-AMERICAN COMPETITION

The jury’s decision in the Ibero-American Contest awards the First Danzante Prize to an extraordinary story that breaks the prejudices of the Western view of indigenous peoples. Kun Bi (Cutting Firewood) takes place in the landscape of the mountains and the customs of the Arhuaco people, which allows its directors, Agamenón Quintero and Jorge Eliécer Alfaro, to establish a forceful dialogue between those who stay and those who leave.

THE FRENCH JONATHAN KOULAVSKY, THE COLOMBIANS AGAMENÓN QUINTERO AND JORGE ELIÉCER ALFARO, AND THE SLOVENIAN KATARINA JAZBEC ARE THE DIRECTORS

This year’s Ibero-American Danzante ‘Cacho Pallero’ prize recognizes the masterful use that the Spanish Júlia de Paz makes of the narrative tools of the thriller, to tell the harrowing social story of the short film Harta.

The third of the contest categories, dedicated to Documentary, has awarded the work of Katarina Jazbec with You can’t automate me (Netherlands/Slovakia), of which the jury has highlighted the originality when it comes to reflecting the mental part of a physical work, in addition to creating an absorbing atmosphere and tempo.

Additionally, A Plena Vista (Mexico / Thailand), by Luis Palomino, wins the Ibero-American Documentary Danzante ‘José Manuel Porquet’ prize because, in addition to showing reality, he actually takes part in it. A special mention highlights the aesthetic originality and the ability to move from personal to social issues of Diana Cam Van Nguyen with Milý Tati (Czech Republic/Slovakia).

The list of winners of the 50th edition is completed by debut films, a category that the Huesca contest has always given a special attention. The Youth jury was responsible for selecting the best first work, and this year the prize goes to year go to Duo li (China), by Zou Jing in the international competition, and to Vientos de Primavera (Spain), by Carmen Pedrero. The first for showing the difficult reality of a woman, in an intimate way, using essential narrative resources, while the Spanish production wins the Ibero-American Danzante Ópera Prima ‘Alberto Sánchez’ prize for finding a way to deepens into stories about her own adolescent acceptance.

The Huesca Film Festival also awards an audience award and another for the best script, on this occasion both went to Spanish directors. While the first was for Lucas Parra’s Entreterrestres, the second went to La loca y el Feminista, by Sandra Gallego and sripted by Pilar Gómez thanks to the splendid dialogues and the great thought provoking ending.

The juries of the international competition, with the director and producer Pablo Baksht, the actress Ruth Gabriel and the director of the Krakow Festival Krzysztof Gierat, had to choose the best work amongst a great variety of short films. The same difficult task that the journalist María Guerra, the director and screenwriter Álex Rodrigo and the actor Edgar Vittorino had to carry out to assess the Iberoamericano works, while the Documentary jury was formed by the Greek actor and promoter Simos Kyparissopoulos and the filmmakers Helena de Llanos and Germán Roda. The juries were completed by Pablo Parra and Ana Mora, in Script, and Alba Forradellas, Alba Goñi, Carlos Cousillas, Irene Atarés, Nicole Cajas and Noelia Tobajas as the young jury of this 50th edition.

The 50th anniversary celebration of the festival has come to an end with an “outstanding” first balance in the words of the director of the event, Rubén Moreno. After two years of restrictions, on this important anniversary “the short filmmakers have returned to the city, the public has supported all the proposals, we have had some exceptional tributes and the international impact is amazing,” says Moreno. During nine days, Huesca has become a cinematographic reference with short films from all over the world and the presence of outstanding artists such as Diego Luna or Terry Gilliam.