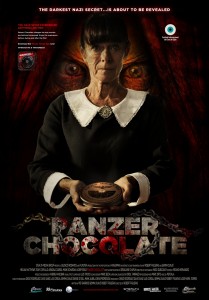 Timed to coincide with Friday 13th, the festival has scheduled a film of genre, in collaboration with YouTalk, Panzer Chocolate (22:30h, check prize) it is worldwide the first feature film allowing spectators to interact with their smartphone or tablet through the APP “Panzer Movie” while at the cinema and even afterwards. An unheard-of experience in Aragon that will be attended by the artistic team. A thematic party on the film in El Monasterio Bar will complete the night.

Julie, English student of Archaeology, travels to Barcelona collecting evidence that support the research on which her doctoral thesis is based: North Pyrenees Mountains hide valuable works of art stolen by the Nazis during World War II. She and three of her friends will shortly discover a bunker called “Valhalla” by the Nazi regime, protected by Das Kommandant Frank; a monstrous creature created during World War II. From that moment on, the quiet life of this group of friends will turn into nightmare.