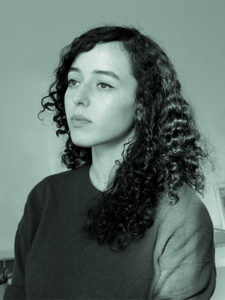 The poster of the 2018 edition of the Upper Aragonese festival will count on the contribution of one exceptional duo: the young Mexican artist Raquel Levit Ruiz and one of the most important Spanish names -on an international level- Isidro Ferrer. Both take over from French Paul Cox, commissioned for the design last year.

The design is authored by Rachel Levit Ruiz (1990), a young Mexican artist and illustrator based in Brooklyn with great prospects. Graduated in Design from the Parsons New School of Design in 2012; since then she has worked for publications as The New York Times, The New Yorker and Lucky Peach. Her work has been exhibited in Mexico City as well as in New York.

Rachel has a ‘critical’ style able to ‘express contemporary contradictions, with sarcastic and raw illustrations, depicting a common reality, yet far from social conventions’ as some specialized publications as Inkult Magazine define her. Her work does not only include drawing and illustration, she also works formats as diverse as pottery design or even confectionery together with blogger/chef Azúcar Pastel.

There is another outstanding contribution to the poster design: Huesca-based artist Isidro Ferrer, National Design Award (2002) and Illustration (2008); he is to sign the typographic composition. Last time Ferrer actively collaborated in the elaboration of the festival poster was in 2012 along with acclaimed photographer Chema Madoz, a work awarded a Bronze Medal in the annual awards of the prestigious web Film Festival Posters, specialized in film marketing and merchandising.