LETICIA DOLERA: ‘FILM SCENE IS MAINLY MALE-CENTRED, WITHOUT HALF THE POPULATION OUR CULTURAL DISCOURSE IS INCOMPLETE’ 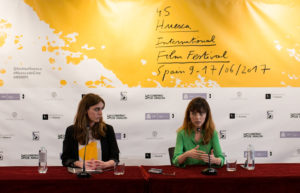 The actress, director and scriptwriter Leticia Dolera received the Ciudad de Huesca Award at the opening of the 45th edition of Huesca International Film Festival. The award, aimed at recognizing professionals that are examples for young generations of filmmakers, was received by Dolera ‘as an encouragement and a token of affection’, as well as a sign showing that her stories are demanded by the audience. Leticia had no hesitation in reclaiming the need to go on telling stories with female perspective as well as stories about women. She also focussed on the obstacles they currently face in film industry. ‘I am aware that, to his day, it is even more difficult to defend discourses coming from a female character or from a point of view that culturally we perceive as female. Film scene is mainly male-centred, without half of the population our cultural discourse is incomplete. We must reflect who we are and if half of the population is missing this discourse is faulty. A fact underlined by the festival director herself, Azucena Garanto, when she expressed how proud the festival -and she as a woman- were of having her as an example as she ‘is fighting for a place in the film industry and paving the way for the generation to come’.

After Requisitos para ser una persona normal, her directorial debut, Dolera combined her three facets and said she wanted to do likewise in the future: “For me, telling stories is what makes me tick and I can do it using these three facets, that are interrelated to one another, and I hope I can always do it like that’. Though she could not provide information, Leticia Dolera said she was immersed in the writing of her second feature film. Her foray in direction and scriptwriting came out of ‘the need to establish a more intense relationship with cinema, which I am passionate about. To live it behind the camera is a responsibility, you get immersed in the cinematographic world in a more in-depth manner. In the end, to direct is to provide a perspective and I felt like taking risks, going out on a limb’.

Coinciding with a period in which she was not working so much as an actress, Dolera undertook this journey into cinema from behind the camera, writing and shooting her first short film Lo siento, te quiero: ‘I have etched in my memory first shooting day, I got butterflies in my stomach, how telling a story from behind the camera can be so magical, it is an amazing journey’. And from that moment on, her passion for filmmaking grew. After two more shorts, Leticia Dolera did not forget her passion for shooting, ‘because the more you shoot, the more you enjoy it’.

The performer of titles as outstanding as The Bride or [•REC]³: Genesis recognized the importance of film showcases such as Huesca Festival, specialized in shorts: ‘Supporting short film is wonderful because it is our future and we have to back it. Today’s female and male directors are those who are going to narrate the stories in the future’. Besides, she had no hesitation in encouraging new generations to be honest when telling their stories, ‘because honesty is important when creating’.