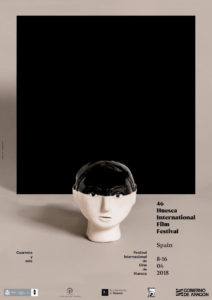 The 46th edition of Huesca International Film Festival has presented the official image, a poster by Mexican artist and illustrator Rachel Levit. Designed by Levit, photograph by Josefina Santos and with Isidro Ferrer’s cooperation with the selection of the artist, the work depicts the sculpture of a head made in ceramic facing a black square, an element that, according to the authoress, ‘can be seen as a screen’. The final result is a composition expressly linked to the seventh art that ‘recalls films’ characters as well as the imagination of filmmakers’.

The festival is very excited with this work and its capacity to ‘attract the interest of the audience’ as Rubén Moreno, Festival director, declared, pointing at the same time to what he considers to be its first purpose. The result is ‘suggestive, striking and identifying’ and the corporative identity of the present edition is going to spin around it. On the authoress, Moreno pointed out that Levit’s selection ‘has been a wise decision on account of the result, her youth, her Latin character, where the Festival has a major impact, as well as her prospect as an artist’. For the festival, endorsed by the Oscar and the Goya Awards, it is important to count on a woman as authoress of the piece, as ‘it allows us to start paying down the debt we have with female artists and designers, scarcely represented so far.

The poster is historically a key element of the festival, in the last years such important names as Chema Madoz, Isidro Ferrer, Pepé Cerda, Zeelot or the Estudio Lo Siento have been commissioned to develop it; in 2018, Rachel takes over from French Paul Cox. Levit (Mexico City, 1990) stars an outstanding prospect after moving to New York so as to study Illustration at Parsons New School of Design. Since then, she works as a freelance illustrator and visual artist. Her works have been published by The New York Times, The Paris Review or The New Yorker and she has taken part in collective exhibitions in the USA, Mexico and Copenhagen. In 2017 she gains recognition by becoming an AGY member, the Alliance Graphique Internationale Association, a club that gathers the world elite of design and graphic arts.