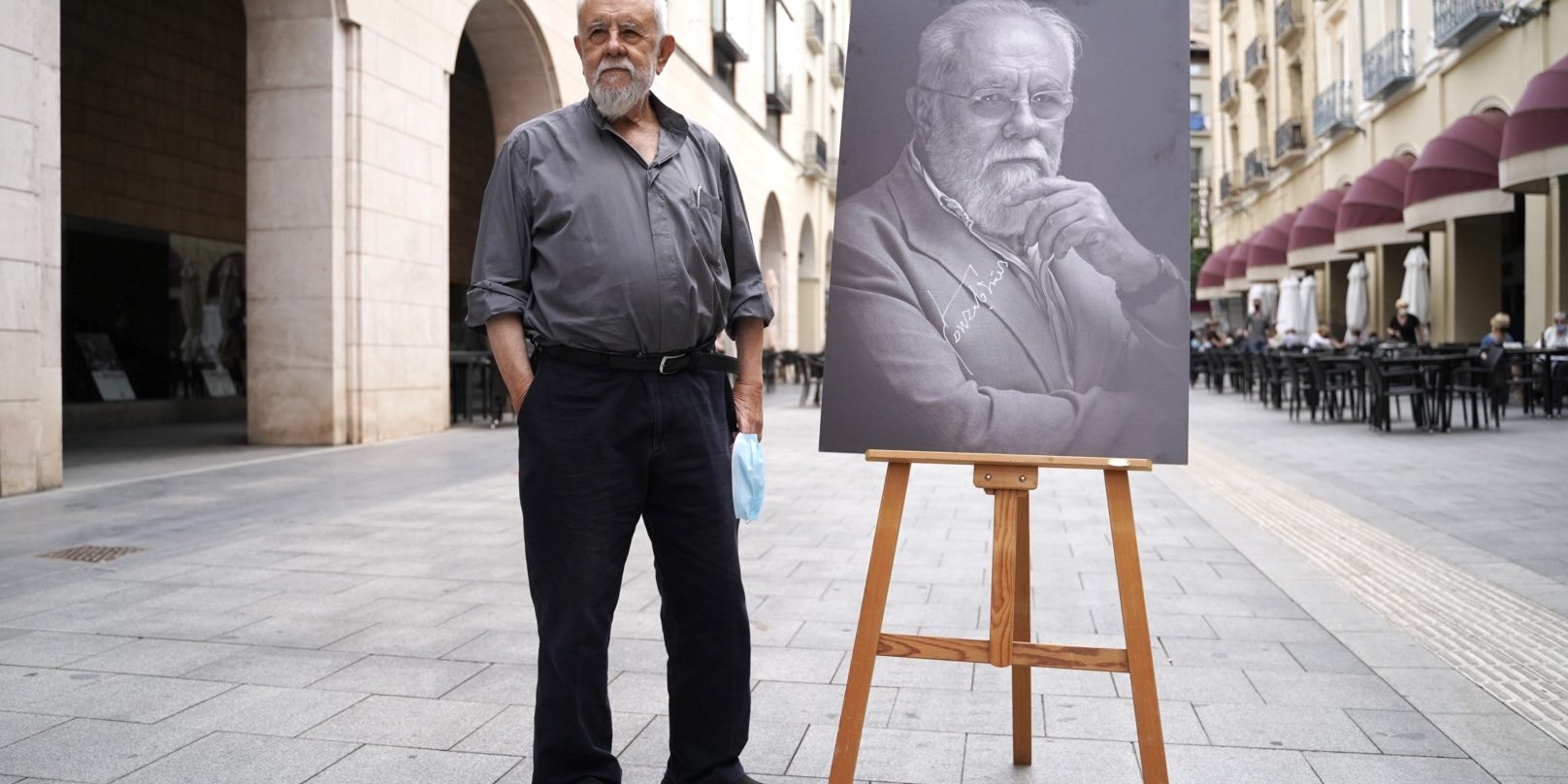 ANNE-HÉLÈNE SUÁREZ, AUTHOR OF THE STORY ON WHICH THE SHORT IS BASED, AND PABLO AULADELL, ILLUSTRATOR, ALSO ATTEND THE SCREENING

“To do something that looks like cinema is not easy.” Gonzalo Suárez, director, writer and screenwriter, defended all the people involved in the creation of a film at the press conference dedicated to the presentation of the Luis Buñuel Award at the 49th Huesca International Film Festival, which he receives this year.

“There are very few people who would feel the way Gonzalo feels right now for receiving the Luis Buñuel tribute” said Luis Alegre -who also came to Huesca-, pointing out that “both are creators who have done things in a unique way. Suárez is a genre in itself he has created a literary and cinematographic work that is part of history for its audacity and its eagerness to go further ”. With so many congratulations, Suárez commented that “it is the first time that I am happy to wear a mask so that I can hide my embarrassment. Indeed, my genre can be described as degenerate, but I’d rather do that than follow the predictable tide. Without risk and adventure, life can be very boring ”.

When talking about the Aragonese filmmaker the award was named after, Suárez said that “he would like to avoid the obvious”, “but the obvious fact is that he was a genius” he conceded. “Joaquim Jordà and I spent a whole night drinking wine and eating sardines and he told us stories of all kinds. At that time I was a journalist, so I wrote a very long interview about that night. I took it to him before I published it and he was furious because, of course, he thought I had planned that, which I did not: it just occurred to me later. I told him not to worry,  that I would forget about the interview, but then he told me: ‘Don’t, it’s well written. Even if it were talking about my doorman, I would also be interested. ‘ Of course, Buñuel rightly censored part of the interview and cut off the things that could generate controversy ”.

WORLD PREMIERE OF HIS LAST WORK

Suárez will also present his latest short film, Alas de Tiniebla, an adaptation of a story by Anne-Hélène Suárez with drawings by Pablo Auladell and which will have its world premiere at the festival, after receiving the Luis Buñuel trophy. The award ceremony at the Olimpia Theater will also present the medium-length film El Sueño de Malinche, -also created in tandem with Auladell-.

In addition to the work of the writer and illustrator, Suárez highlighted the important participation of the producer Joaquín García de Quirós (also producer El Sueño de Malinche), the editor of his latest works, Juanjo Reguera, and the actors Ana Álvarez, José Sacristán and Charo López. “When you talk about a movie, it is often referred only as a director’s work, for example Blade Runner to Ridley Scott, it has always seemed very unfair to me. There are also the scriptwriters, Philip K. Dick… ”, he commented, adding that“ the fact is that I am happy to be here ”. “Shortly after childhood I was in Huesca, in a mountain and a river, I don’t remember what they were called. But that’s better, because it can be any of its mountains and any of its rivers ”.

Anne-Hélène Suárez explained that Alas de Tiniebla was born from a dream  in which, in the middle of a night, huge, dark birds descended to her, generating, however, a soothing feeling. “All those birds made the night full of lights, shades … At first, it was going to be a story for children who are afraid of the night, for them not to be scared anymore” she said, adding that she later mixed it with the Chinese legend of the archer Yi.

“I am very excited to present these two films”, which were born, according to Suárez, because “I had recorded voices with some actors and I didn’t know what to do with them. I recorded them out of desperation, having failed a movie project … or two, or three … or four. That’s when Pablo Auladell comes into the picture: he is the perfect fit not only because of his talent and his suggestive drawings, but also because his spirit can bear with my sense of humor and my puns, both of which are often unbearable. Pablo is the person who has translated the story into images. As it happens with most directors, I am the one who did the least ”.

“Life is a formidable teacher of sarcasm and it always takes us down,” explained Auladell. “Before meeting Gonzalo, it struck me that my fellow illustrators always said that their work was highly influenced by the cinema, while I was bragging that mine didn´t have such a marked influence. This is how I wanted to differentiate myself. In 2016 Gonzalo called me and since then I have been working in cinema. El Sueño de Malinche’s and Alas de Tiniebla are the two craziest projects I’ve ever participated in”, he confessed with a laugh. “What I mean is that, for example, one Monday Gonzalo called me to say: “Look Pablo, I thought that this sequence could be a triptych like The Garden of Earthly Delights but in Aztec.” And on Tuesday afternoon he asked me if it was ready because he and Juanjo were there, and they wanted to edit something ”. Finally, Pablo Auladell stressed that these two films gave him the great opportunity to do brilliant works”.

“I was afraid that El Sueño de Malinche would not be liked in Mexico, because it is a tricky matter, but it was very successful, it was screened at various festivals. And now the book is published in France. The drawings give it an artistic character that, in turn, provides distance and that distance is thought provoking. It is another way of talking about something that we can never fully cover ”.

With the Luis Buñuel Award, Gonzalo Suárez joins a long list of personalities who have received this award and which includes such prominent names as Bertrand Tavernier, Marisa Paredes, Stephen Frears, Carlos Saura, Ángela Molina, Jean-Claude Carrière, Costa- Gavras, Álex de la Iglesia, the Taviani brothers and Isabel Coixet, among many others.

Gonzalo Suárez (Oviedo, 1934) is a key name in Spanish cinema. He has  received tributes in festivals such as Cannes, Berlin, Rio de Janeiro, Moscow, Chicago, Paris and San Sebastián.

The filmmaker, who defines himself as a “writer who makes films”, is the author of cinema and literary works in which reality and imagination are constantly intermingled. He has directed some of the most relevant films of the second half of the 20th century in Spain, such as the multi-award-winning Ditirambo, Remando al viento (for which he won the Silver Shell at the San Sebastián Festival and the Goya for Best Director), Epilogue (Youth Award at the Cannes Film Festival) and Don Juan en los Infiernos, among many others. His record includes the National Cinematography Award, the Gold Medal for Fine Arts, he has been named Knight of the Arts and Letters of France and of the Order of Alfonso X the Wise, the first time that this award was given to a film director; in addition to having eight Goya awards for his films.