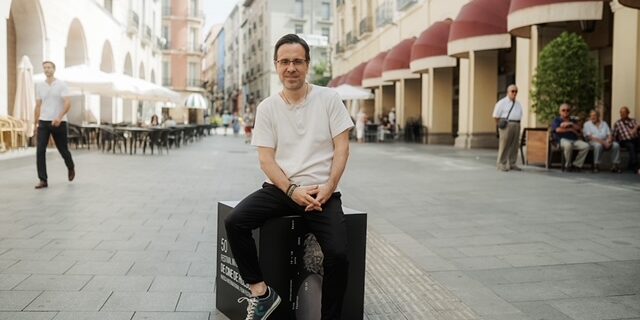 “I have sought to rediscover his life and work, and update it for new generations.” With these words, the director, Germán Roda, summarized the documentary that intends to give Miguel Fleta the recognition he deserves, the best tenor of an entire era who triumphed in theaters in more than 50 countries, including La Scala in Milan, the Royal Theater and the Metropolitan in New York.

On June 9, 1925, the Olimpia theatre was inaugurated by Miguel Fleta, the same venue that has hosted the world premiere of the documentary Fleta Tenor Mito, within the 50th Huesca International Film Festival. After this first screening, it will continue its way through European competitions and, the idea is that it reaches Latin America and the United States “because it is a universal story”, Roda highlights.

THE OLIMPIA HAS HOSTED THE WORLD PREMIERE OF THE DOCUMENTARY, THE THEATER THAT MIGUEL FLETA INAUGURATED ON JUNE 9, 1925

The documentary narrates the life of Miguel, a boy who began to sing jotas in his parents’ bar and ended up becoming the best tenor of his time, acclaimed all over the world. “When I began to investigate I realized that the life of Miguel Fleta was not well told,” said the author, who also stressed how exciting was the documentation process. In this work, he has found images “that nobody knew they existed” and that the public will be able to discover in the footage.

Important international names take part in the film, such as Javier Camarera, one of the top opera singers, who admires Fleta and declares himself passionate about the Aragonese artist “because of how he understands opera, he was brave and dared not to follow the script”. There are also contributions from Pedro la Virgen, a renowned tenor who decided to dedicate himself to this profession when he was listening to one of Fleta’s records, and from María, soprano and granddaughter of Fleta, in addition to some pictures of her son recovered from the TVE archive.

The narrator of the story is the Aragonese actor Jorge Usón, with the participation, among others, of the humanist Ramón Gener, and the writers Alejandro Martínez and Sergio Castillo, whose book has served as a source of inspiration. “I knew who Fleta was but, like most, I knew so little that a great part of the documentary was a surprise to,” admited Roda himself, who insisted that “we are going to tell the story of Miguel Fleta as it should have been told”.

THE FOOTAGE CONTAINS UNPUBLISHED IMAGES WHOSE EXISTENCE WAS NOT KNOWN

Miguel Fleta (Huesca, 1897- La Coruña, 1938) earned many nicknames for his unique voice, he was the last of a long family of brothers and his first musical steps took place in the rondalla of his town until he reached the Conservatory of the Liceo de Barcelona. Later, he would study repertoire with the Belgian teacher Luisa Pierrick and it was in 1919 when he made his debut at the Trieste Theater (Italy). He lived through the reign of Alfonso XIII, the dictatorship of Primo de Rivera, the Republic and the Civil War. Despite his premature death, at only 40 years old, he left more than a hundred recordings of his performances.

The Alto Aragonese tenor is remembered for interpretations such as I Puritani, by Bellini, Rigoletto, La Bohème and Doña Francisquita, which he sang on more than fifty occasions. In this idea of approaching the most real Fleta, the documentary’s poster itself already shows him as “a dandy”, to change the image of an older and deteriorated man, as he is often imagined, for one when he was at his greatest splendor.

The director, specialized in the documentary genre, has already been at the Festival with his last two works, the one centered on the famous clown Marcelino and the last one by Manuel Vilas, one of the key figures in current Spanish literature. Roda has explained the “many common points” between Marcelino Orbés and Miguel Fleta, among which he highlighted “how great they were and how little known they are”.