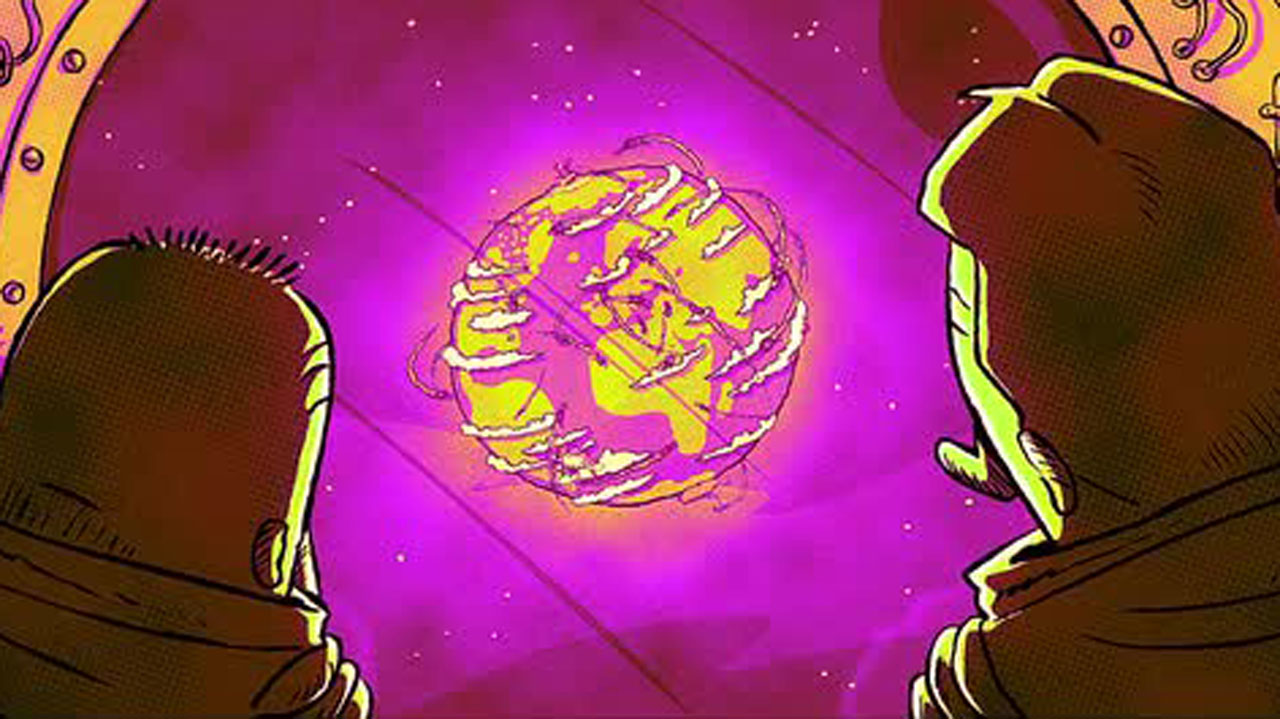 Special parallel section in collaboration with the Planetarium of Aragon that includes four special sci-fi-themed short films that will be screened in the exceptional dome of the Planetarium.

God in the Sky

‘God In The Sky’ tells the story of a young woman dealing with a crisis of faith. One day, an interstellar object appears on Earth and begins sending everyone visions of the afterlife – everyone except her.

Dan has been an animator since 2007, working in motion-graphics first, working on TVC’s and music videos, before moving across into video-game animation, where the games he’s worked on have been singled out during Apple keynote speeches (‘Overland’) and been nominated for BAFTA Games Awards (‘NeoCab’). His first love has always been film and he hopes to bring more attention to disabled filmmakers and their challenges as he uses this film to pursue further filmmaking projects of all kinds.
Sean graduated with a Bachelor of Creative Arts (Film & Television) from Deakin University in 2016, with his wry comedy graduate film (‘Party Tricks’) going on to be showcased at Perth’s Revelation International Film Festival and the Ohio Indie Gathering Film Festival respectively. He regularly works within the realm of corporate videography, with the bulk of his time spent editing or camera operating/assisting. As a storyteller on the autism spectrum, he is eager to tell a wide ranging variety of stories from a unique perspective.

Paco is a fisherman with a distant relationship with his neighbors. He lives in a small town that has chosen to earn money over the well-being of its inhabitants. The discovery of a strange artifact will radically change the relationships between them all.

Amid the din of chainsaws, loggers hum happily as they cut down trees to be used as decor for a fashion show. A contemporary cartoon satire, in the form of a burlesque musical tragi-comedy, leads us into a delirious whirlwind of chain reactions as chaotic as they are grotesque…

Born in 1977. He has been producing his own short films since the late 1990s, combining his cinematographic vision with his love of drawing. Creator of the comic web series Les Enquêtes de Dick Spader, selected at the Annecy and Ottawa festivals, he later directed an interactive comic for Nike and continued in 2006 with Reflets, an animated thriller with an international career (Dresden, Brooklyn, Animamundi. ..). N’Djekoh (2012) was selected for Annecy 2013 and was also included in the program The New Faces of French Animation, shot in Canada in 2014. In 2017 he founded, together with Stéphane Debureau and Jean-Philippe Gréau, UTOPI, an artistic cooperative with which he will direct and produce L’anguille, la Fouine et le Vautour, selected in more than fifty international festivals, such as Cinanima and Zebra Poetry. In 2019, he directed an animation clip for Les pieds nus, and animations for works directed by Laetitia Gonzalbes, Je m’appelle Erik Satie comme tout le monde and La folle et inconvenante Histoire des femmes. In 2021 he premiered a new animated short film with Utopi, Mondo Domino.

Spain, 1977. Mari, a 50-year-old housewife dissatisfied with her life, spends her days reading UFO magazines and has a devotion to aliens. One night she goes to the countryside to spot UFOs with her group of friends and she discovers a heartbreaking revelation about her marriage. Sick of earthlings, Mari decides to seek love outside Earth.

Lucas Parra was born in 1998 in Barcelona, and at a very young age he started shooting short films with the help of his family. He graduated in film directing at ESCAC and has continued his career drawing inspiration from peculiar stories of his family’s village.