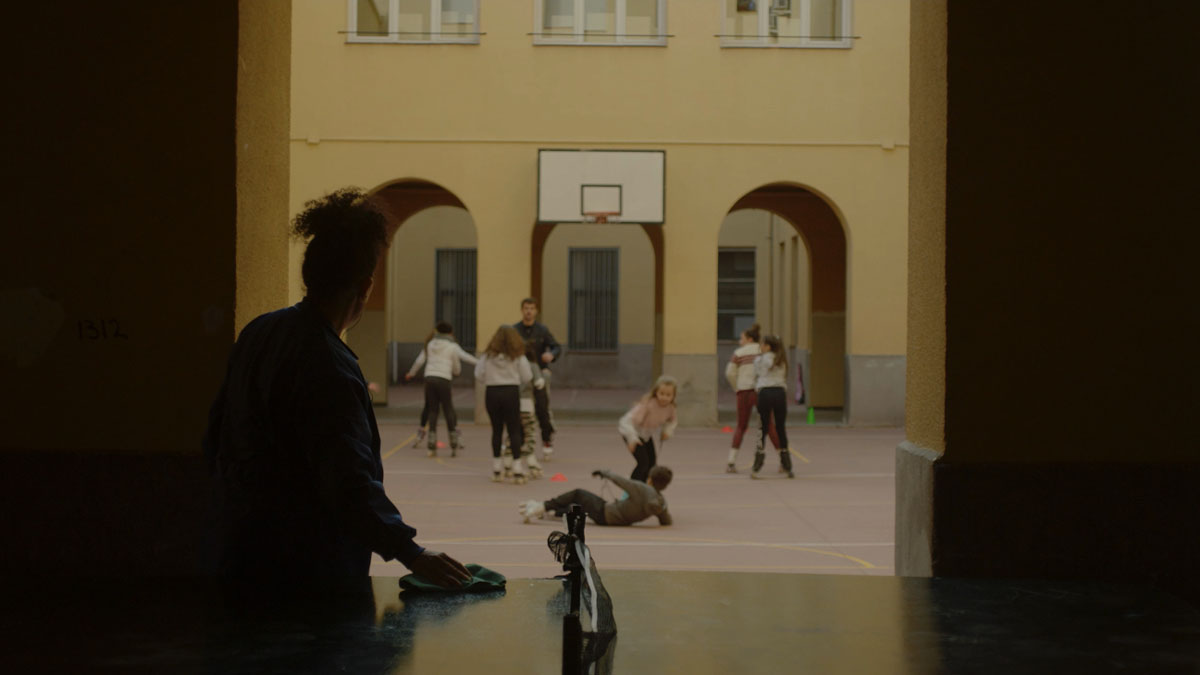 This traveling exhibition of short films brings the cinema made by women to the general public inciting debate on film production from a feminist perspective. This activity is sponsored by the Spanish Ministry of Culture, the Madrid Community and the Madrid City Council.

The session brings together 4 short films, all of them directed by members of the Association of Women Filmmakers and Audiovisuals (CIMA), who have obtained numerous awards and show the diversity of genres, themes and approaches to cinema made by women.

Sofía works as a cleaner at a school. Iván is a skating teacher. She peeks at his classes. He knows it.

Director, producer, screenwriter and editor. She has a degree in Information Sciences. She has also studied Dramatic Art at the Juan Carlos Corazza school. Between 1993 and 2006 she worked as a Director at Telemadrid where she made, among others, the famous children’s program Cyberclub. From 2006, she made documentaries for the program Documentos TV (RTVE). Since 2008 she has been working as a freelance filmmaker. She has directed 5 short films to date: A Violeta (1999), Mills Papier Machè (2013), Ixtab (2016), Lo que se Espera de Mí (2019) and Loca (2020).

A boy who is bullied at his school becomes friend with girl who also feels left out. Not everything that takes place in a schoolyard is a game.

She studied English philology at the University of Deusto, where she began to write his own stories always from a cinema perspective. After her master’s degree, she moved to Madrid and graduated in Film Directing from the Madrid Film School (ECAM). Her final work, the short film Clases Particulares, was her first success in the world of short film. She later worked as an assistant director and scriptwriter on television series, until she took the leap towards advertising. She has directed advertisements for brands such as Toyota, Coca-Cola, Samsung or ONCE, among others. In 2012 she founded her own production company: Igloo Films. She has also directed short films such as They Say (2011) and Nena (2011) that have received more than 100 national and international awards all together.

Shadows are not always underground.

Director, screenwriter, editor and producer. She has a degree in Hispanic Philology. She obtained her Diploma of Advanced Studies at the Humboldt University of Berlin thanks to a German scholarship from the German Academic Exchange Service. She subsequently completed a Master’s Degree in Film Directing in New York, where she lived for two years and began working in film productions. Upon her return to Spain, she created the production company Rinoceronte Films. He has made seven short films: Selfie (2019), En esas Tierras (2018), Sub Terrae (2017), Un Día Cualquiera(2014), Things in Common (2011), Encounter (2010) and Anniversary (2009),for which she received the Caracola Alcances from the Cádiz Documentary Film Festival, the Edward Snowden Award or the Miradas Doc Award, among others. Her first feature film, Tan Antiguo como el Mundo (2012), won the Pre-Columbian Circle of Gold Award at the 29th Bogotá International Film Festival. She has also worked as a production director and editor in other successful projects, as well as a programme planner for the CicloDocma in Matadero Madrid and a teacher in the Documentary Film Master at the LENS School of Visual Arts.

Marga works in a slaughterhouse. She lives trapped in a routine that does not fulfils her. Today, a cow has looked at her.

Writer and director with a relevant career as an actress in theater, film and television. In 2014 she founded the Momotrup Films production company with Oriol Ruiz. She is part of the New Filmmakers Platform, she is a member of the Catalunya Film Academy and the Association of Women Filmmakers. Her first short film, Una Nit (2014), received the Critics’ Award for Best New Director at the ABC’16 Ibero-American Short Film Festival. His second short film, Fugit (2016), was nominated for Best Fiction Short Film at the Goya Awards 2018. Vaca (2018) has received 80 official selections in 16 different countries, 19 awards and the nomination for the HBO Ibero-American Short Film Award at the 36th Miami Film Festival. It was also Nominated for Best Fiction Short Film at the 2020 Goya Awards.