DIEGO LUNA: “THIS AWARD CLOSES A CIRCLE OF LOVE FOR MY MOTHER, FOR CINEMA AND FOR SPAIN” 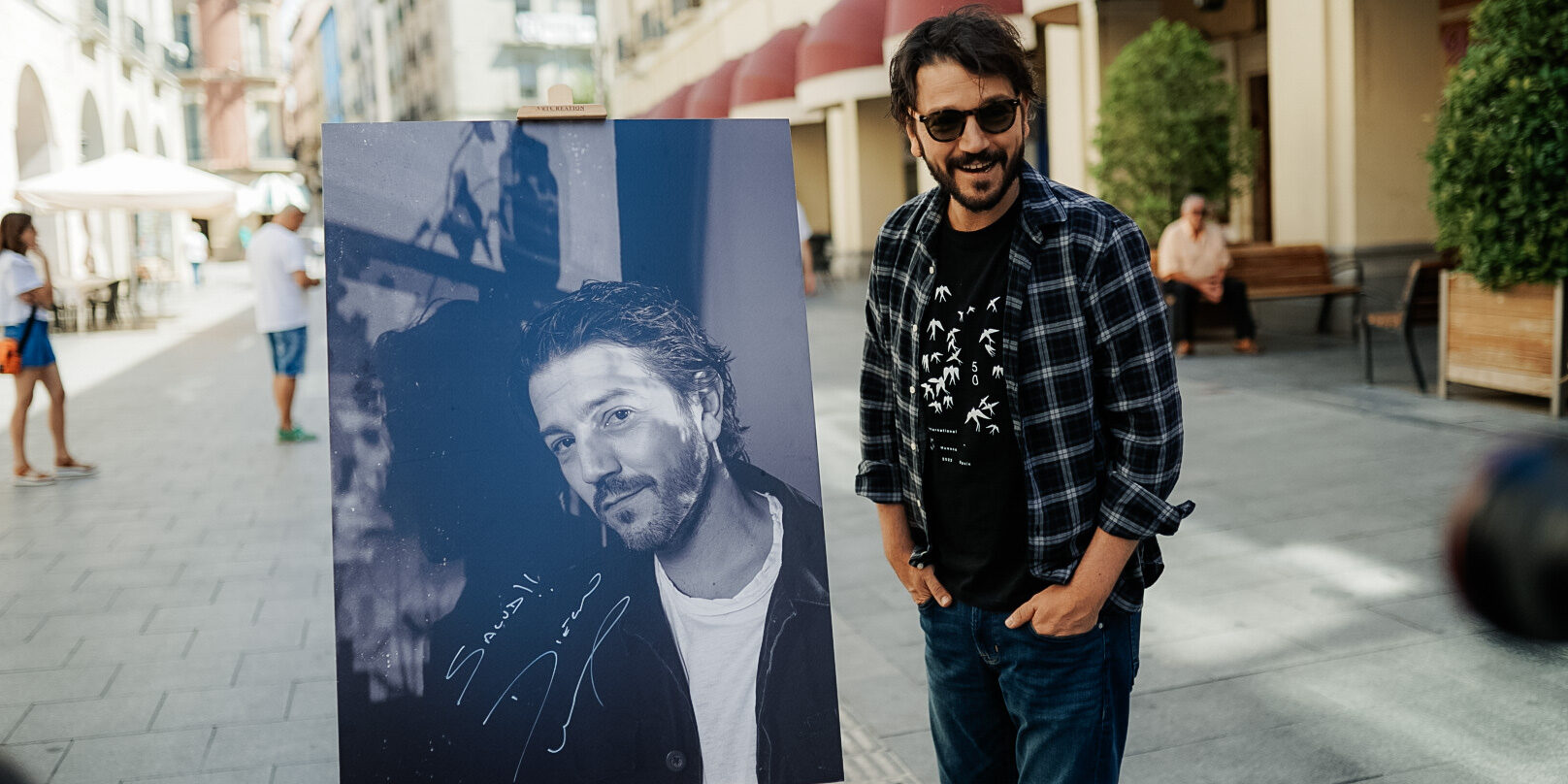 THE CIUDAD DE HUESCA CARLOS SAURA AWARD, WHICH HE COLLECTED AT THE OPENING OF THE 50TH EDITION OF THE HUESCA INTERNATIONAL FILM FESTIVAL HIGHLIGHTS HIS CAREER AND INTERNATIONAL PROJECTION

HIS LINKS TO THE HUESCA FESTIVAL, WHICH HE HAS QUALIFIED AS A PLATFORM FOR FILMMAKERS, COME FROM A VERY YOUNG AGE

The actor Diego Luna visited Huesca with one of the most outstanding careers in Ibero-American audiovisual and also unusual, managing to combine auteur cinema with great Hollywood blockbusters. Having reached his plain artistic maturity, the Mexican recognizes that the fcloses a circle “of love for my mother, for cinema, and for Spain and the stories I grew up watching”, but he feels that he has still much to tell.

Diego Luna spoke with a lot of emotion after receiving one of the first ovations of the contest on the opening gala of its 50th edition, at the Olimpia Theater. In an international event linked to short films and before a large number of media, Diego Luna has vindicated this film format that until a few years ago was considered as secondary. However, for him it is something unique that requires “talent and eloquence” and “creates masters”. “A good short film stays in your head forever” and he believes that it will give much more to talk about when the seventh art no longer only lives in movie theaters.

Son of a stage designer and architect and a renowned artist and costume designer of English origin, he has recognized that receiving this award has been a very special moment for him, because behind the name of Saura there is a very personal story of the life of the Mexican actor. The first time he stood in front of the cameras, almost by chance, was in the film that the Aragonese filmmaker was shooting in his country, Antonieta, when he was barely two years old and where his mother was working. “That moment has had a strong influence in me becoming a filmmaker” confessed the Mexican, after explaining that he was told exactly forty years ago, his mother had died returning from the filming set.

As Luna himself commented, some of his works have been screened in Huesca, but it is the first time he has set foot on this land. His official debut in front of the cameras came in 1992 with the short film El último fin de año, a work directed by Javier Bourges that won the Danzante de Oro at the event in Huesca. He perfectly remembers that moment when he was twelve years old “because I thought my dad would be the only person who would see my work” he recounted laughing.

He sees in the Huesca Festival a history of roots, but above all, a reference for many Latin American filmmakers “who share a language and not a market”, in reference to the lack of mutual support that exists between countries when it comes to making films. To this message that Diego Luna conveyed this Saturday from Huesca, he added: “We think in territorial terms, but festivals like this remind us to focus only on the universal emotions of our stories.”

He has works in almost one hundred films, but at the age of 42, one can no longer speak of Diego Luna only as an actor, because he has already also shown his talent as a director, screenwriter and producer. “I like the idea of not settling down, of discovering if I am capable of doing something else, and this profession allows me to do so”.

LINKS BETWEEN SPAIN AND MEXICO

Diego Luna has been very close to Spain these last two years, and this has allowed him to detect that “Mexico and Spain could do much more things together and we have neglected that connection”. He has remembered titles like Y tu mamá también, along with Alfonso Cuarón, Gael García Bernal and Maribel Verdú, which led him to reach international fame. “There, we realized that we could continue doing what we liked and still continue to conquer spaces and audiences, that there was a future in this profession”, he concluded.

NEXT PREMIERE OF THE STAR WARS SERIES

Over the last year, the actor has been giving life to the protagonist of the Star Wars saga series, which is in post-production. Disney+ plans to release it this coming August so that the public can see the five years prior Rogue One, a feature film co-starring Luna, about which he commented that “rarely is a story told backwards, so it is also possible to stimulate a different creativity and think about what leads someone to make a decision”.

The Huesca International Film Festival is sponsored by the Ministry of Culture and Sports, the Government of Aragon, the Huesca Provincial Council, the Huesca City Council, the Anselmo Pie Foundation, with the collaboration of Obra Social “la Caixa”, TUHUESCA and the Aragonese Institute of the woman. The Festival also has the support of Acción Cultural Española (AC / E) through its Program for the Internationalization of Spanish Culture (PICE).