The Greek-French director, Konstantinos Gavras, known as Costa-Gavras, and the Spanish filmmaker Alex de la Iglesia will receive the Luis Buñuel Award at next edition of Huesca International Film Festival. Huesca Festival celebrates its 45th edition with these two homages aimed at reflecting a double focus, national and international, while promoting short film as its essence. ‘Counting on the presence of two of the most important figures in the history of the seventh art, both coming from the short film world, is a unique experience that shows once again the influence and history of the festival’ declared Azucena Garanto, the festival’s director.

Both filmmakers have established themselves as benchmarks of world cinema with a language and form of expression very personal which they brought to the screen and transmitted to the spectator. Costa-Gavras’ work is marked by social and political protest cinema; the enforced disappearances during Augusto Pinochet’s dictatorship, the collusion between the CIA and the civil-military dictatorship in Uruguay between 1973 and ‘85, in State of Siege; or the tortures of Stalinism in The Confession, are some examples. Alex de la Iglesia is one of the most renowned figures of Spanish cinema, has a powerful and baroque visual language where he has created an imagery of his own through popular culture, esperpento and parody; this is clearly evidenced by the iconic titles The Day of the Beast, Common Wealth or Witching and Bitching.

On next July 14, both filmmakers will be awarded, they have won countless prizes and recognitions of the most important festivals across the world. The current president of the French Film Library accumulates over fifty international awards among which stands out the Oscar Award for Best Adapted Script, a BAFTA Award, the Berlin Golden Bear, the Golden Palm and Best Director at Cannes Festival, a Caesar Award for his work as a scriptwriter or the Order of Arts and Letters of Spain. De la Iglesia was awarded a Goya, the Silver Lion for Best Direction at Venice Festival, two Fotogramas de Plata and several nominations of the European Film Awards, he was also President of the Spanish Academy of Arts and Sciences from June 2009 to February 2011.

Thus, the names of Costa-Gavras and Álex de la Iglesia join the long list of winners that includes icons such as José Luis Borau, Stephen Frears, Bertrand Tavernier, Carlos Saura, Aki Kaurismaki, the brothers Vittorio and Apolo Taviani, Ángela Molina or -last year- Jean Claude Carrière, two-Oscar winner and Buñuel’s own scriptwriter, who in turn worked for Gavras himself. Álex de la Iglesia also has a direct relationship with Calanda’s master since in his last work, The Bar, he pays homage to The Exterminating Angel. 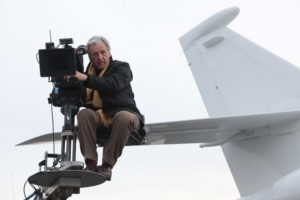 Konstantinos Gavras (Loutra-Iraias -Greece-, 1933) moved to Paris at the beginning of the 50s. After dropping Literature Studies at the Sorbonne, Gavras enrolled in Filmmaking at Institut Des Hautes Etudes Cinématographiques. His film debut came in 1958, when he shot his first short film Les rates, he combined it with different works as direction assistant to René Clair, René Clement, Henri Verneuil, Jacques Demy, Marcel Ophüls, Jean Giono or Jean Becker

His first feature film was The Sleeping Car Murders (1965), a movie based on Sebastien Japrisot’s novel, whose script was also signed by him. Yves Montand was chosen as protagonist of this adaptation, one of his favourite actors in his following films. The success in France and the United States, and the contacts made during the shooting, concretely with Jacques Perrin, helped him to accomplish his following projects. At the end of the 60s he shot Z, a work based on the political novel by the Greek writer, journalist and diplomat Vasilis Vasiliscós, that reconstructs the events surrounding Grigoris Lambrakis’s assassination, a Greek politician murdered by the state parapolice organization in 1963. The script was written by Gavras together with the Spanish Jorge Semprún, contemporary of the filmmaker that lived in Paris since 1941, with whom he also worked in the script Le serment des barbares, project by Gavras based on the novel by the Algerian Boualem Sansai that was not finally accomplished.

Z gave the Greek-French director the Oscar for Best Foreign Language Film and Best Film Editing, the Golden Globe for Best Foreign Film, Jury Prize and Best Actor at Cannes Festival, in addition to several nominations to the BAFTA Awards, achieving Best Music, among others. In the 60s he shot The Confession and The State of Siege, with which Costa-Gavras established himself as an engaged filmmaker and gave his films not only a social awareness but also a political one; both movies were greeted with high acclaim by critics and nominated to the Golden Globe for Best Foreign Film.

In the 80s, Costa-Gavras finally entered the Hollywood industry with Missing, starred by Jack Lemmon and Sissy Spacek. The US release led to major controversy and he was branded as a communist, but critics gave a standing ovation to his work, so it obtained the Golden Palm at Cannes Festival and the Oscar for Best Adapted Screenplay among many other awards. At that time he was appointed president of the French Film Library for the first time, a post he currently holds.

The rest of his filmography includes Clair de femme with Romy Schneider and Yves Montand, Hanna K with Jill Clayburgh and Jean Yanne, Family Business with Fanny Ardant and Remi Martin, Betrayed with Debra Winger and Tom Berenger, or Music Box with Jessica Lange and Armin Mueller-Stahl. His last work behind the camera was Capital, a film that explores such a current theme as the instability and the corruption of the financial system that competed for the Golden Seashell at San Sebastián Festival.

Álex de la Iglesia (Bilbao, 1965) graduated in Philosophy from Deusto University. Comic fan, he draw comic strips for fanzines as a teenager. His origins in the world of cinema are linked to Pablo Berger and Enrique Urbizu, with whom he worked as an artistic director in Berger’s short film Mama, and in Urbizu’s film Anything for Money.

His first short was Mirindas asesinas, where he wanted to highlight some people’s disaffection with what is going on around them. This work called Pedro Almodóvar’s attention who, through his film producer El Deseo, participated in his first film Mutant Action, winner of three Goya Awards.

It was with his second film, The Day of the Beast (1995), that Álex de la Iglesia established himself as one of the most relevant contemporary directors of Spanish cinema, obtaining a total of six Goya Awards, among which there were Best Spanish Director of the year and Best New Actor, for Santiago Segura, who made himself known as an actor in this film. With this movie Terele Pávez came back to the stage and became one of his usual actresses in the following productions, and it became a blockbuster, one of the most watched films of the season.

From this moment on his filmography was consolidated with titles as Dance with the Devil, Dying of Laughter, Common Wealth and 800 Bullets. Afterwards came Ferpect Crime and The Oxford Murders with Elijah Wood, Leonor Watling and John Hurt.

In the last decade, De la Iglesia has accumulated awards and blockbusters as The Last Circus, winner of the Silver Lion for Best Direction and Best Script at Venice International Festival; or Witching & Bitching, that became one of the most watched Spanish titles of the year. In 2010 he received the National Film Award and between 2009 and 2011 he was appointed chairman of the Spanish Academy of Arts and Sciences.

His last work, The Bar, had a large ensemble cast where several generations of the Spanish cinema met; it was presented at the Berlinale and opened last edition of Málaga Film Festival, its commercial released became a box-office hit, only behind the world phenomenon Beauty and the Beast.

With a multidisciplinary profile, he wrote sketches for television, series or the novel Payasos en la lavadora or the more recent Recuérdame que te odie; De la Iglesia’s most representative features are satire, black humour and science fiction, together with the most characteristic everyday nature of Spanish society. Besides, Álex de la Iglesia’s films display a cast of fetish actors and actresses, as the previously mentioned Terele Pávez, Carmen Maura, or Segura himself, Manuel Tallafé, Antonio de la Torre or the late Álex Angulo.