‘Cinema and gastronomy’ comes back thanks to Bon Appétit 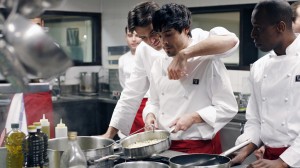 Next Friday, visual pleasure and gastronomy will be combined at Bendita Ruina. The film Bon Appétit -David Pinillos’ first work, Goya Award winning and featuring Unax Ugalde- will be the thread of this ‘informal proposal at affordable prices’ that will join viewing and tasting in one experience backing at the same time Huesca Candidacy to ‘Spanish capital of gastronomy’. Cooking and restaurant industry will be the background to that romantic comedy.

Four tapas paired with four drinks will be served keeping pace with the plot of the film.