CIMA RECEIVES THE PEPE ESCRICHE AWARD, STRESSING THE NEED OF AN OVERHAUL OF AUDIOVISUAL VIOLENCE 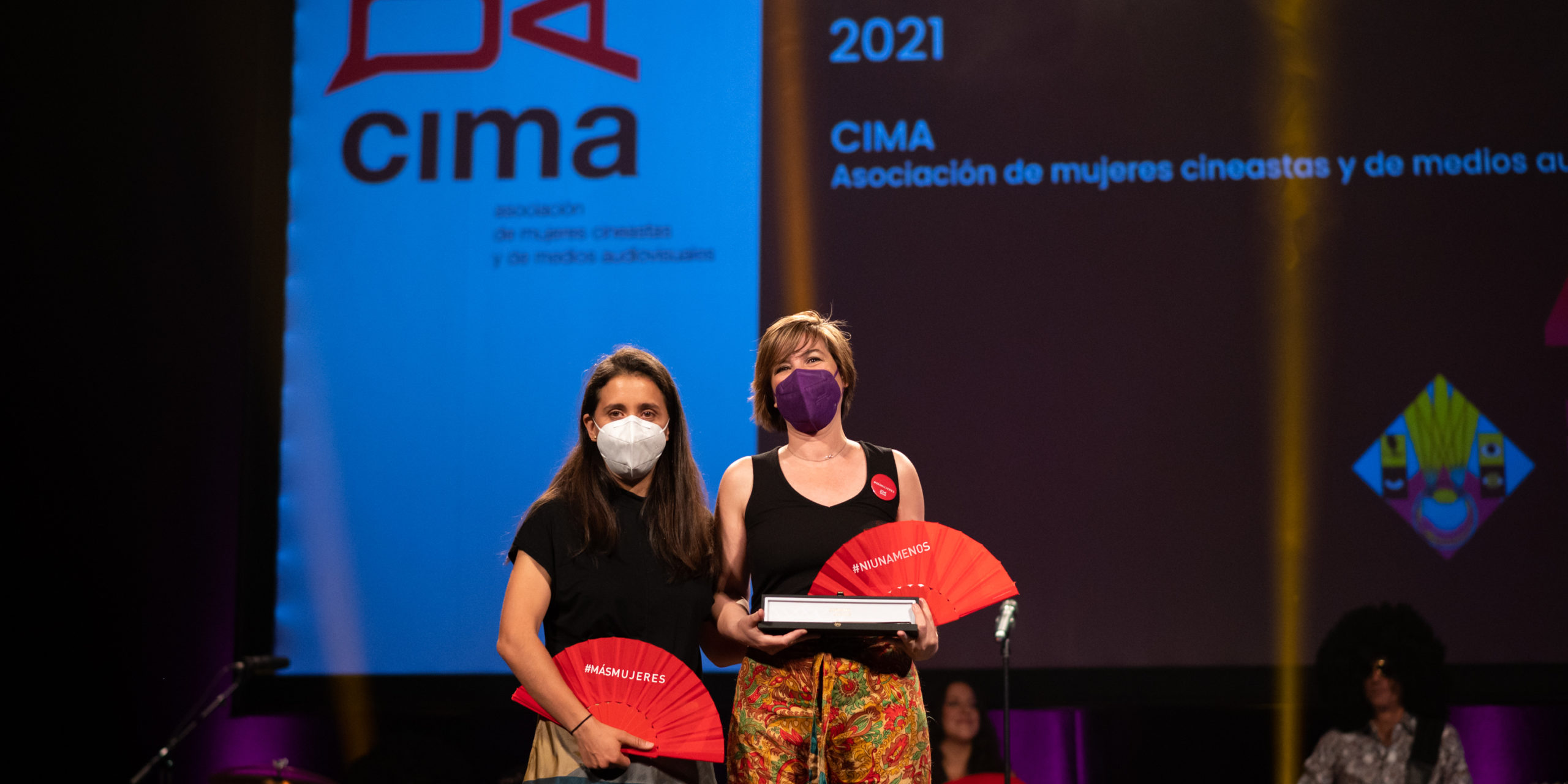 “We encourage you to rethink cinema from a critical perspective that does not trivialize violence against women and children. You can count on CIMA to help promote this concept. You can count on CIMA to make sure women are part of it. Together, we represent more than half of the world ”; With these words, Patricia Roda and Virginia Yagüe, respectively vice president and former president of the board of the Association of Women Filmmakers and Audiovisual Media (CIMA), received the Pepe Escriche award from the 49th edition of the Huesca International Film Festival. In a speech in which explicit mentions have been made to the recurring events of sexist violence in the news in recent days. Both have emphasized the importance of the references that are generated in the cinema: “We have a responsibility to prevent violent behavior from becoming chronic ”.

The award ceremony, presented by the actress Itziar Miranda, was the opening of the new edition of the festival at the Olimpia Theater, to which the short films and feature films will return until Saturday, June 19. The festival kicked off with the film La Casa del Caracol, by Macarena Astorga, in a sold out session.

Earlier in the day, outside Ultramarinos La Confianza, Yagüe and Roda,  accompanied by Carmen Aliaga, a representative of the IAM (Aragonese Institute for Women), highlighted the role of women in the audiovisual industry. Thus, Roda pointed out some of the most revealing data from the latest CIMA report, recently presented, which analyzes female representation in the production teams of Spanish feature films in 2020.

The numbers speak for themselves and, in summary, what they show is that  production teams and support, and award contests, only have a 33% women representation, compared to 67% of men. In addition, in most positions (except for makeup, hairdressing and wardrobe, always with a female majority, and art direction and production direction, which similar percentages), women are still a minority.

Films directed by women have an average budget of 51% less than those directed by men. According to this data, they highlighted that, despite popular belief that women do not know how to make action or large budget films, ”the reality is that women are put in a ghetto”, referring to films of a more intimate cut. Yagüe criticized the fact that: “the perverse part of this is that it is commonly said that ‘it is what women prefer to do,'” when the truth is that it is the only thing they can do.

This disparity behind the cameras is also reflected in what happens in front of it, in the stories that are told. Yagüe pointed out that we have to “be aware of the high impact of audiovisual contents,” highlighting that teenagers are a are bulk of consumers of these audiovisual products, that they look at these as models and copy their references. Yagüe insisted in two prevailing current trends: the “spectacularization” of violence in stories (including the abuse of rape as a plot resource), and the abundancy of unreal female characters within unrealistic stories with an age, experience, social relationships or private life profile away from flesh and blood women. “Many female characters that I read,” said Yagüe, who also advises on scripts from a gender point of view, “are mean, they have had great personal resignations or can be very nasty with their fellow workmates. Neither the women around me nor I recognize ourselves in them ”.

However, she insisted that “we do not want it to sound like a complaint, a negative view, the current data is clear and we are working on it to make it change.” Currently, CIMA has almost 700 members, who represent a wide variety of creative and technical departments; a cross professional and plural association that in recent years has intensified its efforts so that equality is guaranteed by law.

CIMA’s role is key to promoting the visibility of qualified and trained professionals. His work of dialogue with state and regional institutions and organizations has been essential to launch advisory programs and creative impulse, film exhibitions and gatherings and debate tables; all this with a focus on the role of women within the cinema industry.